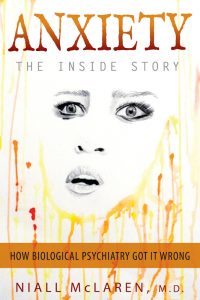 Anxiety — The Inside Story by Niall McLaren, M.D.

Anxiety – The Inside Story: How Biological Psychiatry Got It Wrong
Niall McLaren
Future Psychiatry Press (2018)
ISBN 9781615994106
Reviewed by Marjorine Castillo for Reader Views (3/19)

“Anxiety- The Inside Story: How Biological Psychiatry Got It Wrong” by Niall McLaren is insightful, clear, and interesting to read, and was written for a wide audience, even if you do not have a background in psychiatry.

In the first part of his book he provides a brief background about this training and how he concluded the main point of his book; that anxiety is the most powerful of all emotions and it is at the root of psychological disorders, not a genetic or biological defect. He argues that psychiatry has no theory of mental disorders, and views psychological disorders as originating in biology. He explains that this ideological perspective is highly problematic because it ignores the source of mental distress, and instead pushes biologically-based treatments that are tied to economic and political interest of people in positions of power. I appreciated his honesty regarding this matter because this is often left out of textbooks and academic articles. He ends the section with a clear statement about his position regarding the origin of mental disorders and uses case studies to illustrate how his method of taking a psychiatric history can be useful in uncovering the real problem behind a person’s mental distress. Although he provides examples of how to assess the psychiatric history, a specific section outlining why and how he uses specific questions early in the book would have been useful. For example, he describes his patient’s physical characteristics (e.g. tattoos) but doesn’t explain why until later in the book. He claims the questions are in the appendix, but for some reason I could not find it.

In the second part of the book, he digs deeper into the role of anxiety and its origins in human nature. In these chapters, he employs clear definitions to breakdown the distinction between anxiety and other related phenomenon, which is vital to understanding how anxiety is such a powerful driving force behind psychiatric disturbances. He explains how anxiety is a normal response to perceived threat, but it becomes problematic when threat is perceived beyond reason. This leads to a constant state of anxious arousal, and its effects are manifested in different ways (i.e. different mental disorders). He describes many examples of what he believes are misdiagnoses of mental disorders that are reactions to anxiety. The misdiagnosis exacerbates the problems because the focus is on treatment of symptoms and not on the cause of the distress, which reinforces the anxiety. A theme that emerged throughout the book is the connection between anxiety and morality. People are often concerned about their social status and do not want to be viewed as weak or damaged, but where does this come from? He goes into detail about evolutionary theories on how we may be wired to fear isolation and rejection, but when did this become such a prevalent problem? Is anxiety an issue because of the way modern society is structured? The section discusses this through a patriarchal perspective, where the man has to prove to the woman that he is a “winner.” I was a bit disappointed, because how would this testosterone-driven theory apply to matriarchal societies? And if anxiety is not a problem in such societies, why not? What can we learn from this? I think including a non-Western or alternative ideology about anxiety and its root could have been informative in fleshing out the nature of anxiety. Another aspect that was particularly interesting was the discussion about how viewing personality disorder symptoms as a spectrum of human nature is more accurate than considering them as categories. However, psychiatry only acknowledges specific expressions of personality disorders and the distress associated with it. He makes the connection between industry-driven interests of individuals who have personality disorder traits, but feel no remorse, guilt, or distress. By the traditional definitions of psychiatry, these people would not be considered to have a mental illness. Is this a coincidence? Niall seems to think it’s not.

The third part of the book focused on ways that people cope with anxiety. I found this to be the most helpful part of the discussion because, as someone who has experienced anxiety for as long as I can remember, it critically analyzed how to recognize the different types of responses that stem from anxiety. I connected with many of the cases he presented, and it gave me a better understanding of my own experiences, but also how to use this information to improve the field of psychiatry. It was an innovative way of examining anxiety that I had not come across before, which speaks to the importance of reading this book. The case studies he used illustrated how the behaviors (avoidance and denial, distraction, obsessions and compulsions, drugs, and aggression) are responses to experiencing a prolonged anxious state. He connected these responses to how people tend to use google to self-diagnose based on the categorical model of mental disorders. It is easy for people to accept that they have a mental disorder based on these categories, and that the cure or treatment is just one (or more) pill(s) away. How did people deal with anxiety before medication?

Finally, the last section of the book reiterates some of the ideas he discussed throughout the book; that the biological model of mental disorders leads us to believe that mental disorders are categorically distinct and biologically-based illnesses, and this leads to misdiagnosis and infective treatments that case more harm than good. The underlying issue (anxiety) is reinforced over time and the severity increases to the point where it engulfs the person’s life. He once again discusses the role of orthodox psychiatrists and pharmaceutical companies in manipulating the discourse to maintain the vicious cycle of dependence on biologically-based treatments. Instead of maintaining this status quo, he proposes viewing at psychiatric treatment through a dynamic model, which is much more comprehensive method of assessment than checking off symptoms and prescribing medication. However, he doesn’t go into detail about what the complex mental modules are. I believe he could benefit from taking a look at developmental psychological theory, either the Ecological Systems Theory (EST) or Phenomenological Variant of Ecological Systems Theory (PVEST) for future works. It takes a very similar approach to what he discusses throughout the book and goes into detail about relationship between physiological and psychological phenomena (psychophysiology).

I thoroughly enjoyed and highly recommend reading, “Anxiety – The Inside Story: How Biological Psychiatry Got It Wrong” by Niall McLaren. Overall, the book was well-written and adds a much-needed perspective to the discussion surrounding the etiology of mental disorders. In my opinion, the book is very hard to put down. As soon as you start reading, each chapter captures your attention in a different way. Even though there was some repetition throughout the book, I think in some areas it was necessary in order to remind the reader of the main purpose of the book. However, some sections could have been shortened, and he could have expanded more on the psychiatric history and the dynamic model instead. He did not sugarcoat his opinion about BigPharma and other stakeholders that are only interested in profits rather than patient well-being. One thing that was a bit distracting was the fact that he would discuss a topic, and then introduce a new one, and then indicate that he will discuss that new term later and go back to the original topic. Despite these minor adjustments, I think everyone interested or experiencing mental distress should read this book.