Humanizing Psychiatrists: Toward a Humane Psychiatry 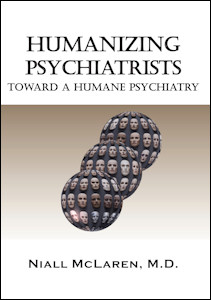 Humanizing Psychiatrists is Niall McLaren’s third book in a series directed at developing the Biocognitive Model of Psychiatry, the previous books being Humanizing Madness and Humanizing Psychiatry. I have previously read and reviewed Humanizing Madness and found it very informative and insightful. Humanizing Psychiatrists also has many valid points, although its approach is more critical and somewhat mocking of the profession to the point where it may be off-putting to readers and even offensive to some. That said, if readers can look past McLaren’s tone and objectively consider the points he makes, they will see that his arguments are filled with common sense.

The book is divided into two sections. The first explains what is wrong with the current state of psychiatry and how it is lacking in its foundations. The second offers examples of McLaren’s own approaches as a psychiatrist and how they can provide a more humane approach to helping the people psychiatry is supposed to help.

The first part, titled “The Logic of Mental Disorder” might have been titled the “Illogic of Mental Disorder” because the author discusses in separate chapters a series of psychiatric fields of study including functionalism, biological naturalism, phenomenology, and the biopsychosocial model, and in each discussion, he shows the flaws and lack of sound basis for this study and the beliefs behind it. Since I am not a psychiatrist or student of psychiatry, but rather simply someone interested in how the mind works, I do not feel qualified enough to argue or judge the statements McLaren makes in this short book review; however, I encourage people to read his argument carefully, and I believe any reader willing to be objective will feel his points have a great deal of validity to them. Even a reader like myself not familiar with much of the material McLaren explores can see that he is applying common sense to pull away the veil of a lot of mumbo jumbo that has been allowed to enter psychiatry, largely due to the academic establishment and vested interests by others in the profession seeking to make careers for themselves.

I admit McLaren’s style turned me off at times. He has an entire chapter titled “The Drivel Generators” where he talks about the logic or lack of logic in speech patterns, beginning by using examples of drivel by well-known novelists who were extremely prolific. Being an author and Ph.D. in literature as well as a fan of many of the authors he mentions, including Agatha Christie and Edgar Rice Burroughs, I thought his approach over the top and completely untrue. Some of the plots of these novels might be interchangeable but not at the actual word and sentence level as he claims. His point regards mental illness and speech patterns, and he makes his point in the end, but his somewhat aggressive and mocking tone in this discussion and elsewhere is the biggest flaw of the book and is probably responsible for his complaints when others do not listen to him, although he probably developed this tone also as a result of people not listening to his arguments. Despite the need for him to tone down his tone, I have to agree with his point that without criticism there can be no progress. McLaren is especially critical in an article about the psychiatric publishing industry, grinding his ax against journals that would not publish his papers because of his criticism toward the profession and stating the psychiatric publishing industry “has long outlived its value” and is an “obstruction to progress.” It probably has outlived its value, but saying so probably doesn’t help to get other psychiatrists to listen to him.

The second half of the book was far more interesting to me because it focused on the real purpose of psychiatry—how psychiatrists can help their patients. McLaren retains the confidentiality of his patients, but he offers several transcripts of initial sessions where he questions the patients about their family backgrounds, problems, etc. The point here is that he interviews them quite extensively to understand in their own words what they believe are the problems they are facing. McLaren is himself very humane in these interviews, showing his gentle side and concern for his patients, such as when he reassures male patients it is all right for them to cry. The first interview is with a patient who ended up having twenty-one different diagnoses of what his problem was. McLaren asks the reader what the state of psychiatry and its intellectual processes are when it can come up with so many diagnoses, and how can anyone treat so many issues with one prescription. McLaren is especially appalled by how the psychiatric community is so quick to prescribe drugs to people, and its recent obsession with depression while ignoring anxiety. At the end of the book he points out what should be common sense—drugs can’t recode the brain.

While I didn’t always like McLaren’s presentation of the material, in the end, I have to agree with him overall. People have psychiatric issues because they grow up in the wrong homes, have the wrong experiences, and often are just plain unlucky. I am not convinced by the chemical imbalance arguments any more than he is. He also states that big name psychiatrists tend to think they are somehow morally or intellectually superior when the truth is they were just lucky to be born in the right house on the good side of town and someone gave them a break. This statement really resonated with me as being true. We can’t know what our lives would have been like under different circumstances, and the effects of one’s environment on a person cannot be resolved by a drug, but only by helping a person to change his beliefs and thought-patterns; a true psychiatrist will help people in that growth process.

So in the end, I have to admire McLaren for pushing aside empty rhetoric and faulty thinking to come to common sense basic truths about the human condition. I fear his profession will not listen to him, but that does not lessen the value of his arguments. I hope for the sake of their patients, some psychiatrists will read this book and follow his advice and move the profession forward to treat the underlying issues and not just the symptoms.